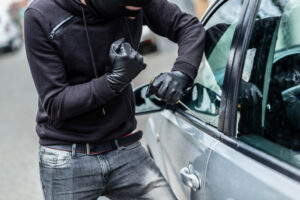 Have you been charged with auto burglary? Are you not sure what this charge entails? Keep reading to learn what the crime involves, what potential penalties you could face, and the most common defense options. Then contact Law Office of Michael L. Fell at (949) 585-9055 to request a free legal consultation.

The Definition of Auto Burglary in California

California law holds that auto burglary is a crime that involves entering a locked vehicle or its trunk with the intent to steal the car, commit a felony in the car, or steal property in the vehicle. This is a wobbler offense, which means that based on the specifics of the case, it could be filed as either a misdemeanor or a felony.

Intent is a Necessary Element of Auto Burglary

Based on the law described above, auto burglary charges could be filed if a person smashes the window of a locked car in order to steal a computer that was left on the seat, if a person uses a screwdriver to unlock a vehicle they intend to steal, or if they break into a locked car with the intention of hiding inside it and then kidnapping the owner when they returned.

Auto burglary is considered a second-degree burglary theft crime. This is a wobbler offense that can be charged as a misdemeanor or as a felony, depending on the specifics of the case. For persons charged with misdemeanor auto burglary, the maximum penalty is one year in jail, while a person convicted of felony auto burglary could face 16 months, two years, or three years – not to mention potential sentencing enhancements such as using a firearm.

There Are Legal Defense Options

The good news is that there are defense options. When you work with Law Office of Michael L. Fell, we will consider all sides to find the best way to fight for your freedom. If we can show that the car was not locked, that you did not have the intent to commit a theft or felony in the car, or that there is not enough evidence to convict you, then charges could be dropped, or you could be found not guilty.

If you are facing charges of auto burglary, we suggest that you contact Law Office of Michael L. Fell at (949) 585-9055 right away to request a free legal consultation with an attorney who can help.